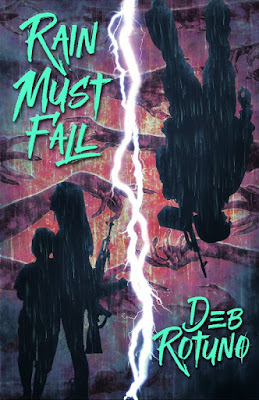 Jack Chambers was all the way across the country—separated from his family—when life as he knew it came to a screeching halt. A virus straight out of a horror movie has been unleashed, turning friends, neighbors, and family members into a walking nightmare. Jack must fight to make his way back home to his wife and son from Florida all the way to Oregon in a world that is determined to kill them all. Sara Chambers considered herself to be a strong-minded military wife and mother. When her husband is called away for temporary duty, she never thought that her quiet, small-town life would be turned upside down. Following her husband’s frantic instructions, Sara must protect their son, Freddie, and the last remaining members of the small town of Sandy, Oregon, and get them somewhere safe, get them to the one place Jack told her to take them—their cabin at Clear Lake. The world is no longer safe. It’s kill or be killed. With the odds stacked against them, Jack and Sara fight to not only survive but to hold on to hope that their family can be reunited even against such incredible odds. Deb has been married to her husband for going on 14 years. They've always had rescued pets, and at the moment, they have 4 cats. She was born and raised in central Florida. She loves the warm temperatures. She's worked in retail for almost 17 years, but if she were able to do anything she wanted, she would be a full-time reader, writer, and fur-baby mom. She has always been a big reader, and writing was something she started late in high school, but she began to dabble in it again once she discovered fanfic in 2009. Since then, she's read and written plenty in her spare time, especially since she cannot watch a TV show or a movie without thinking about how she could write a story like it.
Social Media Links
Facebook - https://www.facebook.com/drotuno Goodreads - https://www.goodreads.com/author/show/14951464.Deb_Rotuno Twitter - @Drotuno Website - http://www.rr-books.com