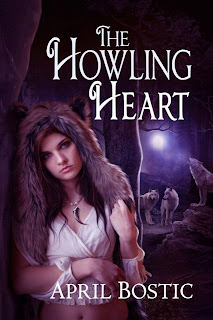 The Howling Heart by April Bostic


Book Description:
Paige Donovan is an ambitious college graduate who aspires to reach the top of the corporate ladder. She’s climbing fast when given the promotion of a lifetime at a prestigious fashion magazine in New York City. Her bright future comes to an unexpected halt after news of her father’s death. She inherits his old cabin in the Colorado Rockies, and just when she thinks her luck couldn’t get any worse, she has a car accident in the mountains and awakens in the small, remote community of Black River.
Soon, she’s engulfed in the mystical world of Varulv---wolves descended from 13th century Scandinavia and blessed by Norse gods with the ability to appear human. Paige is desperate to return home, but never expects to fall for her rescuer, Riley Gray, a charming young werewolf from England who offers her an alternate future with his pack.
Now, she must choose between the career she’s always wanted and the love she’s always dreamed.

I love a good paranormal, so I was over the moon when this little beauty fell into my inbox.
could true love exist between a human and a werewolf?
AT the age of 10 Paige ran away whiles on holiday with her parents in Black River Mountains. She ran into the woods where she met a young beautiful white pup.
What she did not know at the time is that  the pup was no ordinary pup but a young  Riley.
He fell in love with her kind caring friendly spirit and beautiful smile.
He lead her to his pack because he wanted her as a mate.
Problem she Paige Is a human and only 10 and Riley was only 11 plus humans are not allowed in th pack.
After that night strange things stated happening at the family cabin so  her family decided to cut their holiday short. Unfortunately for Riley Paige and her family never returned to the Cabin or Black River.
10 years later Paige is all grown up now a college graduate with a promising job at a prestigious magazine. Life is good until her fathers death.
She taught the cabin was sold but she discovered at her fathers will reading that he in fact did not sell the cabin and has left for to her.
She is both surprise and excited because the cabin, wood and the pup she meet their has not left her dreams for the last 10 years.
Paige decide to visit the cabin but that one visit is set to change her life.
Riley has howled for his lost love until his howling made their way across the country into Paige's dream.
Riley has one chance to get Paige to love him and stay in Black River
The chemistry and sexual energy when she meets Riley again is palatable
"He captivated me and  wrapped my mind in a cloudy haze of arousal"~Paige
After Riley spots her in the only grocery store in town he is immediately transfixed, just like 10 years ago he is complete taken by the young beauty in front of him.
And just like 10 years ago Riley is unable to keep away from her and climbs into her window that night to sleep next to her.
His impulsive action has Paige freaked out and when she tries to make an escape out of Black River she ends up in an accident.
Never to fear Riley to the rescue he saves her and brings her home to recover.
When she finds out her saver is an actual  werewolf will she run or embrace the love he offers her?!?
"I had grown to Love him as his human form, but now, I had to love his wolf form the same way"~Paige
"Riley was my soul mate, and I intended to let him mark me, so we could seal our bond."~Paige
Will the pack leader allow a human to join?!?
Riley is just so sweet and lovable he is real with his feelings and wears his heart on his sleeve.
"She agreed to play in the mud with me, if I agree to let her dress me up like a girl. She use to make me braid her hair."~Riley
He is determined to make Paige his mate and nothing or no one will get in his way he has loved her for so long and his heart has longed foe her more than words can say.
"Divorce didn't exist in the varulv society. They believe in commitment in every sense of the word."
I really enjoyed this book. Riley and his family are English and that was done very  well I felt it was genuine British English.
The story had a lot of different thing going on but I felt it was a little rushed it places and  the ending needed more.
Overall a good steamy story with a deliciously hot werewolf.

Author Bio:
April Bostic is a New Jersey-based, Adult Romance author who enjoys unleashing her creativity and letting her imagination run wild. Her love of romance books inspired her to become not just a reader, but also a writer. In December 2008, she self-published her first novel, a contemporary romance with a supernatural twist entitled "A Rose to the Fallen".
Her first short story, "Right Here, Right Now", released in January 2012, is an erotic romance with a dash of S&M. The following year, she released two more short stories: a romantic urban fantasy inspired by the Greek myth of Eros and Psyche entitled "Eros, My Love", and a sexy romantic comedy entitled "Love Addiction".
After five years, she released her second novel, "The Howling Heart" in August 2013, a paranormal romance that delves into the mystical world of werewolves and Norse gods. To end her busiest year in publishing, April will release her fourth short story in December 2013, an 18th century paranormal romance entitled "A Dark Scandal".
Author Links:
Goodreads - http://www.goodreads.com/author/show/2768953.April_Bostic
Website - http://www.aprilbostic.com/