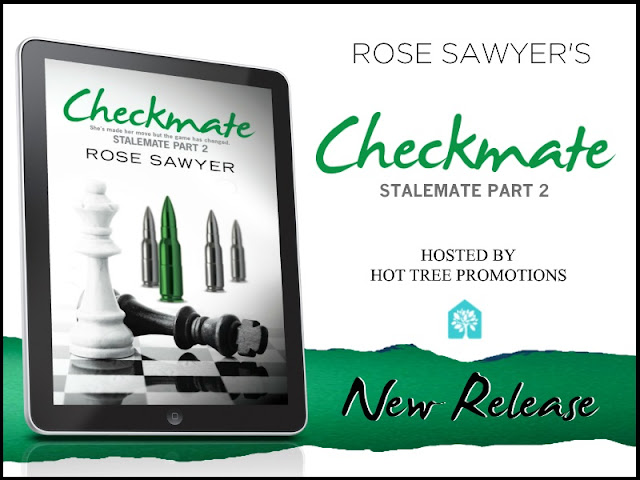 Ellie Collins has always been good at hiding her emotions, but when they threaten to overwhelm her, she channels them into her work. After leaving behind the first person to capture her heart, Ellie’s heartbreak leaves her more motivated than ever before. She has one more job to take care of and nothing left to lose.

Alex King is determined and stubborn. Unable to walk away from the woman who’s left him dazed, his life is about to get crazier than ever. Through the thick fog of deception, both Ellie and Alex have a decision to make that will change their lives forever. They can only hope that their choices are not taken from them before it’s too late.

When the moves are made and the positions set, who will finally deliver checkmate? 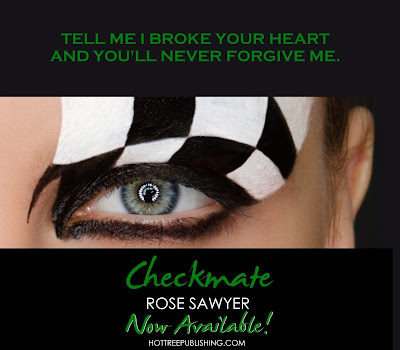 After falling in love with both Alex and Ellie in Stalemate...I couldn't wait for Checkmate.
This book was even better than the first and that is saying something. Rose sawyers writing had me under a spell, I couldn't put this book down and read it in 1 sitting.
I was on the edge all the way through, just when I thought I knew what was coming I was thrown in a spin.

This book CAN NOT be read as a standalone!!!!

We all know this couple had an electrifying connection and were great together from the first book but their relationship was based on lies and deceit.

Ellie had fallen hard but has to protect Alex, they were never supposed to be forever. She was out for revenge and he was a way in...Now he has her heart but she cant stay.

Alex is head strong and he refuses to give Ellie up without a fight. He is the only woman who has ever captured his interest and heart. She is the perfect 10.

When truths and secrets are revealed they both have hard decisions to make but will the be the right ones and for the right reasons???

Were this couple doomed from the very start?

This is a sexy, fun suspense filled read and I would recommend it to everyone

Book 1 now on sale for half price!

Rose Sawyer currently lives on campus full time while working on her undergraduate degree in Biblical and Religious studies with an emphasis on Religion and Sociology in California, where she was born and raised. On weekends, she travels home to see her parents and the gaggle of cats, dogs, horses and other four-legged animals that she loves.

At 19, she has written seven romance novels, is currently writing two more and has another two in the process of being published. The majority of her novels can be found at Wattpad.com, where they are available to read for free.